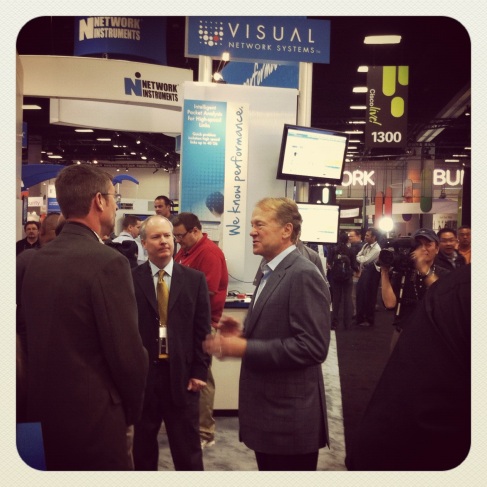 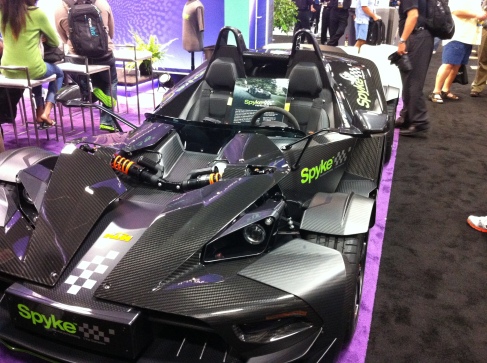 As sluggish as a Sunday can be, I spent the day roaming around the conference center, getting familiarized with the places and halls. Most exhibitions were closed in preparation for a busy week ahead. Cisco Store did however attract a huge crowd, being just the only other place open apart from the Starbucks cafe and the colorful beanbags placed rather unconventionally at different corners on the ground floor. Apart from the usual dose of gadgets and tshirts, the store did have an amazing collection of books from the Cisco Press at a magnanimous 20% discount. I spend quite a bit of time there sifting through certification and technology books.

My only session for the day started at 3:00pm (Pacific Time) at Marriott Hall 3 – Public Sector General Session. A brief walk eating a hot double chocolate cookie served at the front desk, took me to a rather large room, empty at first but soon filled up with techies from the public sector world – Education, Law and Order, NonProfit, what all and what not. I was perhaps the only odd man out, who decided to join in, being curious as I always has been to hear about everything technology. It did pay off rather very well.

The session was kicked off by Bruce Klein, Senior Vice President, Public Sector at Cisco Systems, emphasizing Cisco’s 5 priorities which has helped guide them to a number of major technology acquisitions over the past couple of years – leadership in Core networking, Collaboration, Video, Datacenter and cloud and Connecting business with Technology. He went on to talk about computers turning into a utility just like electricity, a common terminology often used in this fast growing world of technology and Internet. Dave West, Director of systems engineering sales, stepped in next to give a brief overview of architecture from workspace to data centers where Cisco has been throwing much of its focus on.

But it was not until Dave Saxe came on stage that my interest actually started to pick up. His definition of Architecture and how it was different from a network design managed to give me a different perspective on technology. He explained 4 different points that defined an architecture. He said, an architecture must describe complex objects, define relationship between various components, satisfy and chart out key stakeholder requirements and build governance and policies (both IT and business) around it. Lack of architecture, according to him builds silos! His talk further ventured into the importance of architecture and the development of long term technology roadmap within every organization.

Some people, when they talk, all you can do is to sit back and embrace every single word. Randy Wood was one of them! His demonstration of the collaborative tools and the video solutions that Cisco has developed and the various solutions that can be built integrating them, had a flavor of Steve Jobs on stage, sheerly due to the passion that he showed in what he presented! I guess Randy’s bias towards Apple products can just be passed off as an “insignificant” coincidence! For a person who has always been passionate about technology, this was the best part of the session, which ended immediately after an hour long demo by Randy and his team.

Although the day was less eventful than I expected it to be, it certainly did set stage for the things to come over the next 4 days and as I retreated back to my room, I couldn’t wait for the sun to rise tomorrow to a new day overwhelmingly filled with technology. It’s been long since I had one such!

How much more of an irony can there be, when you see a network outage causing almost an hour’s worth of delay at a Networker’s event! Cisco Live certainly did not start off on the right note. Being my first visit to the conference, I did not have a benchmark to base my comparisons on, but the place did seem a little empty, perhaps more because it was a beautiful day outside in San Diego and Sunday was never a good day to be inside, especially when the sun was out.

It’s funny how the geographical clock never works well with its biological counterpart. When on one side of the country I snoozed my alarm at 5:00am to go back to sleep, I was already awake on the other side wondering why my alarm hadn’t gone off yet. The San Diego Convention Center was just a block and a railway line away from the hotel where I stayed. In a city whose major revenue came from conferences, this place was indeed a majestic galleria.

Fine looking ladies dressed in blue welcomed us at the entrance of lobby D. “Ambassadors” as they were tagged at the back, directed me to the registration desk, where the fun was lurking amidst the crowd. I was happy to be one of the first few in the line. But my happiness did not last long, when I saw the faces on the other side of the counter. Network outage was what I heard from my fellow networkers in the line. And everyone of them had the smile of an irony in their faces as they said that. The wait was a bit longer than expected. But fortunately a group of “black cats” (NOC engineers) emerged from nowhere to fix the situation and we were back on track. Although it did take a little bit of hit on the program schedules, I must admit Cisco did a great job to recuperate and get things back running.